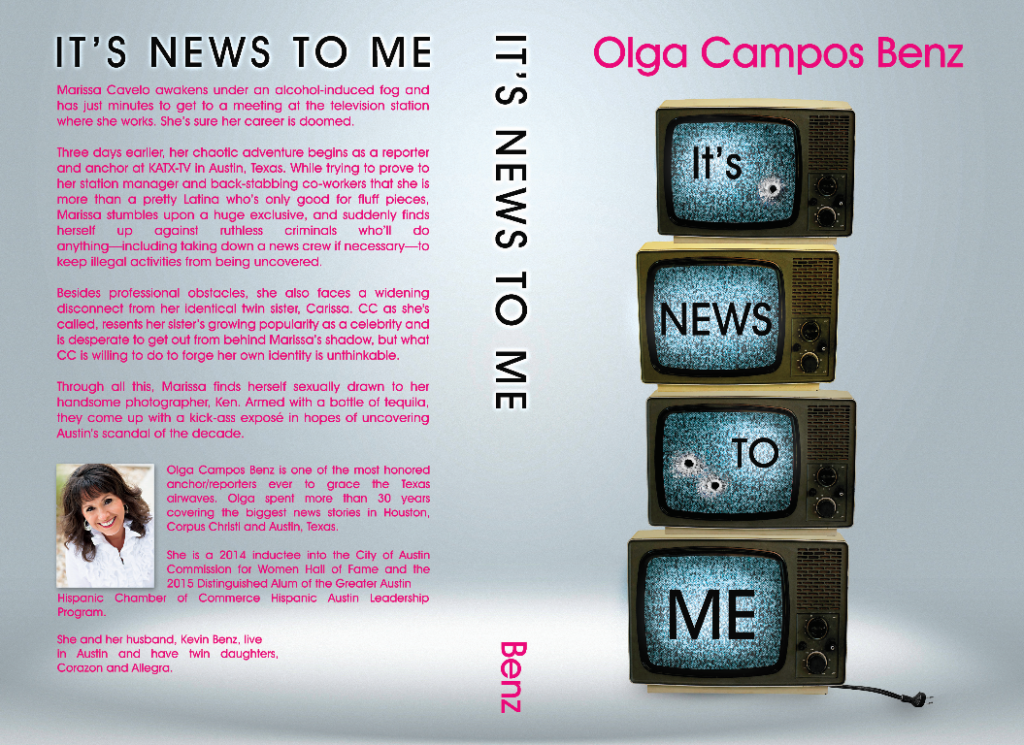 What motivated you to write this book?

Thirty years as a reporter/anchor in four different markets provided me with plenty of material and I knew when I stepped down from the anchor desk that writing a book would be the best way to share the unbelievable day-to-day events that go on in a newsroom.

What about this genre appeals to you?

My favorite genre is fiction, contemporary in which strong, determined women are the main characters. I love stories that share the challenges a character faces and the obstacles she must overcomes on her journey of self-discovery and success. Add some suspense, humor and romance and you have all the elements that appeal to me – and hopefully to readers!

What inspired the title?

The phrase “it’s news to me,” usually means, “I don’t know” or “you got me”, but in this case I wanted to personalize the fact that the story, the journey, the whole experience is important to me – as I hope it will be to readers.

How long did it take to write this book?

From start to finish it took about five years to write, with endless re-writes and edits. Along the way trusted friends lent their eyes and shared their opinions. And even after I retired, anecdotes that played out at obscure tv stations elsewhere made their way into my book.

What do you hope readers take away from reading your book?

Despite all the current media-bashing, local television news is still the most trusted source for information that directly impacts our daily lives. After reading my book, I hope readers will see news personalities as real human beings who inspire us, make us laugh, and are worth cheering for and who will always be welcomed in to their homes and lives – like I was for more than 30 years.

From out of nowhere a painfully bright ray of sunshine peaks through cheap plastic window blinds, forcing Marissa to wakeup. An excruciating pain behind her eyeballs extends all the way down to the back of her head. Marissa’s hair feels as heavy as the solid lead vest the dental assistant puts over a patient before taking x-rays. Speaking of which…the taste in her mouth reminds Marissa of a street gutter in Guadalajara the day after a Dies y Seis celebration, but she sure doesn't feel like celebrating. Instead, her body aches from head to toe and she has this sudden urge to vomit. She sits up, trying to locate the nearest toilet or trashcan. Bad idea. The fast movement only makes the room spin out of control. Marissa hasn’t felt this hungover and disoriented since her college binge drinking days. She lays back down, hoping to collect her bearings, only to discover the rumpled king size bed and boringly beige room are completely unknown to her. Where am I? she nearly asks out loud as she looks down to see she has nothing on but a man's t-shirt. A series of additional questions begins to fill her throbbing head. How much did I drink? What happened last night? Whose bed is this? she hears her mother's word echo in the back of her mind. Esto no se mira bien, mijita. This doesn't look good, my dear?

Then Ken, looking freshly showered and shaved, enters the bedroom. He’s good-looking, grinning and unbelievably sober. All the things she is not at this moment. She’s envious of his calm composure. How can he not be hungover? How is it he's not upset, although his solid reputation as a photojournalist was shattered just mere hours ago? Men! with a jolt back to reality, it suddenly occurs to Marissa that she is under orders to meet the station's general manager at eight a.m. Ay Dios mi! Oh my God! That's in exactly twenty minutes! She jumps out of bed, no longer caring that she’s wearing only a t-shirt or that she feels like crap and may heave. She darts past Ken on her way to the bathroom and leaps into the shower where she turns the water on full blast. It’s freezing! But she knows she must suck it up and withstand the torturous ice-cold water if she’s going to wash away the alcohol-induced fog she’s under.

Marissa hears Ken’s voice through the shower curtain asking seductively, “You need help scrubbing your back? Or any other hard to reach places?”

“No, thanks. I’m fine, but I will need a clean towel, some aspirin and some very strong black coffee,” she shouts back over the full-force of the shower spray.

He laughs and answers, “I already have it waiting for you on a tray. Clean towels are hanging on the rack on the wall. I’ve also made you my special foolproof hangover cure. Just ignore the smell and drink the whole thing.” Before leaving the bathroom, he adds, “Oh, and if you throw-up, you’ll feel better afterward. And in case that happens, I left a new toothbrush for you by the sink. Don’t be in such a rush. It takes exactly six minutes to get to the station from my apartment. You’ve got plenty of time.”

Marissa hears the door to the batroom close behind him as he leaves. She breathes a small sigh of relief as the absorbs his words. The water starts to warm up as it washes down her back, rinsing some of her anxieties down the drain with it. She scurries out of the shower, downs the aspirin and swallows Ken's special concoction and the black coffee in quick succession. Ugh, swamp water, she cringes. Wrapped in a towel, she heads to the bedroom on a mission to find her clothes.

How ironic that the “special outfit” she chose to impress the All Access News Network talent recruiter is going to be the same outfit she’ll wear when learning her fate. She wonders if she should credit the dress for bringing her good luck or blame it for delivering bad news. One thing is for sure, getting dressed goes a lot faster than it took her to take her clothes off just a few hours ago…as best as she can remember. As quickly as possible, she wipes away the caked mascara and liner smudged beneath her eyes and touches up her face using products from the small bag of cosmetics she carries with her at all times. Every anchor and reporter (especially the preening male species), carries a makeup bag to be sure they look their best before any live shot. That’s not easy to do under a blazing Texas sun and 100-plus degree temperatures.

But Marissa would take wilting weather to this hung over state any day! Come to think of it, this is the first time she’s reached into her bag of cosmetic tricks after a night of wild abandonment since…she can’t remember when. No time to try to recall what happened last night. Also, no spare time to go home and change or apply fresh make-up until after this crucial meeting that starts in…TEN MINUTES!

OMG! What the hell was she thinking? Marissa grabs her purse and car keys off the coffee table next to an empty bottle of tequila as she rushes for the front door, only to have Ken scoop her up, crushing her attempt to move past him. He pulls her close to him and envelops her in a luscious kiss. Her body tingles from head to toe. Hazy images from the night before slowly start to seep into her head. She wishes she could linger on the oh-so-enjoyable moments and the sensuous activity in between, but she can’t. Unfortunately, she doesn’t have time for anything more than a two-second kiss. She pushes herself away and dashes out the door to her car with barely a wave goodbye.

Ken is correct. It takes only six minutes to make it to the station’s parking lot from his apartment. What he didn’t mention is that you have to catch all the traffic lights, while going slightly faster than the posted speed limit, to make it there in record-breaking time. It’s a miracle Marissa wasn’t pulled over by cops running radar or that she didn’t kill someone, or herself, on the road. Note to self: in the future avoid driving while hungover. It’s just as bad—if not worse—than driving while intoxicated. It’s sad to think that getting to the station on time might be her biggest accomplishment of the day but at this rate, she’ll savor any small victory.

She forces herself to walk casually through the front door of the television station and head straight to the office of Patrick Stone, General Manager. As she makes her way down the hallway, she passes a few coworkers who blatantly go out of their way not to make eye contact or talk to her. WTF? Do I have a contagious disease? And then it hits her. After the fiasco that happened during yesterday’s five o’clock newscast, she is now an outcast to be shunned by her colleagues. Here she is being summoned to the general manager’s office and the pounding in her head is growing louder. It’s a blaring symphony of nerves, adrenaline and last night’s tequila shots all coming back to haunt her. Trying to shake off the physical pain, she knows her professional fate and her future at KATX are waiting for her. Behind. That. Door.

The general manager’s assistant sees Marissa, looks down at her watch and then picks up the phone saying, “Miss Cavelo just arrived…Okay. I will.” She turns to Marissa and says in a steely, monotone voice, “Go right in.” The assistant pushes a button on her desk and the door to Mr. Stone’s office opens automatically. Marissa walks in with her shoulders back and her head held high, bracing herself for the worst and wondering if this is how an inmate feels as he moves toward his executioner.

No doubt, more than a few heads have rolled in this office. Patrick Stone sits behind his imposing desk, looking pompous and cold. Seated across from him is Executive Producer, Jan Ruther, who has a folder in her lap. Her look is stern and very focused, but Marissa can detect a slight hint of delight under her facade of authority. It’s nosecret that Ruther derives a sick pleasure from the discomfort of others. In this case, Marissa is surprised her discomfort doesn’t have Jan up on Stone’s desk, dancing her ass off!

Mr. Stone motions for her to sit down and is the first to speak. “Marissa, when we hired you, it was with certain…” he pauses and looks down at his neatly manicured nails, as if searching for the right words among the trimmed cuticles, “expectations…that you had the skills and talent to be a productive member of the KATX news team. It’s a team that is known for its high standard of journalism, which has earned the trust of our viewers.” He then asks, “Do you know why you have been summoned here this morning?”

With the throb of her hangover about to make her head explode, Marissa gets the eerie sense that the firing squad she is now facing is about to pull the trigger. With the way she’s feeling at this very moment in her life, a bullet to the forehead would be a welcome relief.